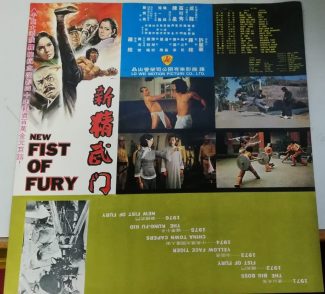 Before he defined himself and a new genre with ‘Snake in the Eagle’s Shadow’, Jackie Chan starred in a series of films that have earned their own cult following. Reel East is proud to present rare genuine memorabilia from these lost epics. Given the star’s then spelling of his English name, this is The Jacky Chan Collection.

‘New Fist of Fury’ saw director Lo Wei return to the most successful of his two Bruce Lee movies. Rather than try to replicate Lee’s Chen Jun character, Lo cast the young Jackie, then ‘Jacky’, as a naive youngster inspired by the memory of Chen Jun.

This semi-official sequel sees actor/choreographer Han Ying-chieh, a villain in ‘Fist of Fury’, cast as the master of Cheng Mu Mun / Ching Wu Men, which has been relocated to Taiwan. Bruce Lee’s leading lady, Nora Miao, reprises her role as the school’s leading female student. In some versions of the film, Lo Wei reprises his role as a benevolent Chinese police inspector.

The film was shot entirely on location in Taiwan, with the Cheng Mo/Ching Wu school represented by the Lukang Folk Arts Museum in Changhua County.

Though not a major hit on first release, ‘New Fist of Fury’ has much to recommend it. Jackie Chan makes an engaging hero, there are a couple of bravura drama and action scenes and the production benefits from the expanded Taiwanese landscapes. The film has earned its place in the pantheon of kung fu cult classics.

Reel East and The Jacky Chan Collection are proud to celebrate ‘New Fist of Fury’ by making this original theatrical flyer, printed for the 1976 release of the film, available to Chan’s worldwide fanbase. This is a large format flyer printed on thick card paper. It includes the film’s celebrated poster artwork. 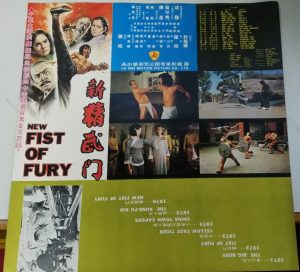 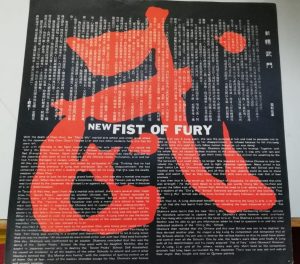