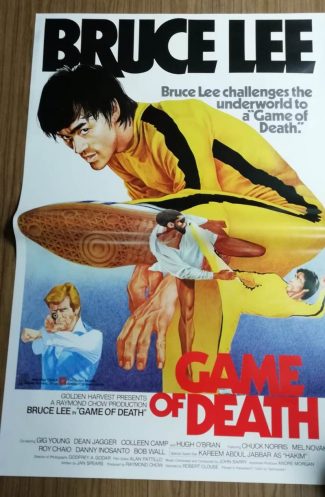 After the success of his directorial debut ‘The Way of the Dragon’, Bruce Lee began work on an ambitious new project, ‘Game of Death’. The film was intended to be a cinematic expression of Lee’s martial arts philosophy, Jeet Kune Do. In ‘Game of Death’, Lee’s character, dressed in a distinctive orange jumpsuit, must fight his way up a pagoda, with each level of the tower guarded by an expert in a different martial art. The footage Bruce shot included duels with characters played by his student Dan Inosanto and basketball great Kareem Abdul-Jabbar. Lee suspended production on the film to make his international starring debut, ‘Enter the Dragon’, and, tragically, died before resuming work on it. In 1978, Golden Harvest incorporated some of the footage Lee had shot into their version of ‘Game of Death’. Reel East is proud to be able to offer the memorabilia created by Golden Harvest to promote ‘Game of Death’ internationally. 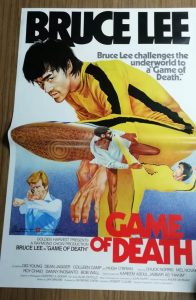