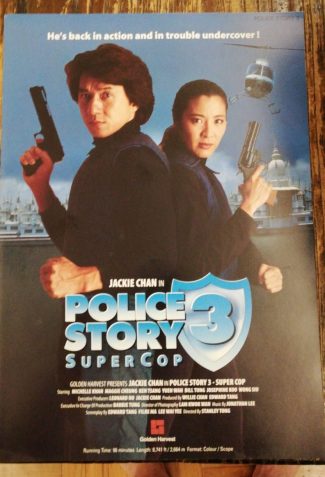 Jackie’s first two ‘Police Story’ movies had set a whole new standard for contemporary Hong Kong cop thrillers. With ‘Police Story 3’, Chan raised the stakes with a new director, Stanley Tong,  a new co-star, Michelle Yeoh and a new locale, Malaysia. Not for nothing did he subtitle the film  ‘Supercop’.

Stanley Tong had come up through the ranks as a stuntman and action coordinator, and made an impressive debut with his film ‘Stone Age Warriors’. Jackie related to this former fall guy wanting to take the director’s chair, and this film saw the start of a long-time relationship between director and star.

After an impressive initial run of action films, Michelle Yeoh had retired from the screen after her marriage to billionaire Dickson Poon. Stanley Tong had been Michelle’s stunt double on her film ‘Magnificent Warriors’, and she had promised Stanley that, if he ever directed a film, she’d come back to star in it. And she was good to her word.

Where ‘Police Story’ and ‘Police Story 2’ had been very definitely set in Hong Kong, the third film shifted the action to Malaysia, and also included scenes shot in the south of China. Maggie Cheung, as the long-suffering girlfriend of Chan’s character, is gamely along for the ride.

Jackie broke out all the stops for this movie, with more stylised martial arts that the earlier films and incredible stunts featuring all manner of vehicles, most memorably a helicopter and a train. The film also marked the first time that Hong Kong audiences heard Chan’s actual voice on the soundtrack!

Reel East and The Jackie Chan Collection are proud to celebrate ‘Police Story 3: Supercop’ by making this original sales flyer, printed for the 1992 release of the film, available to Chan’s worldwide fan base. This is an A4 folded flyer featuring stills and information on the film. 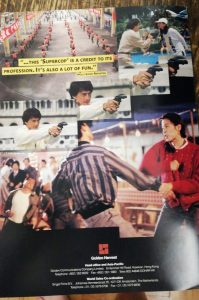 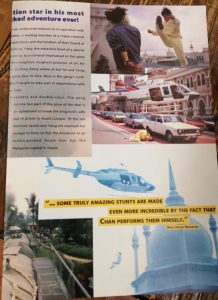 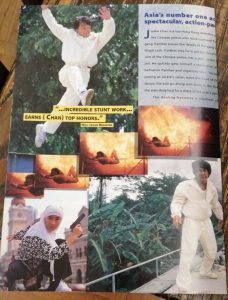 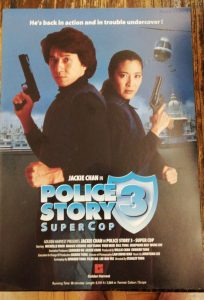